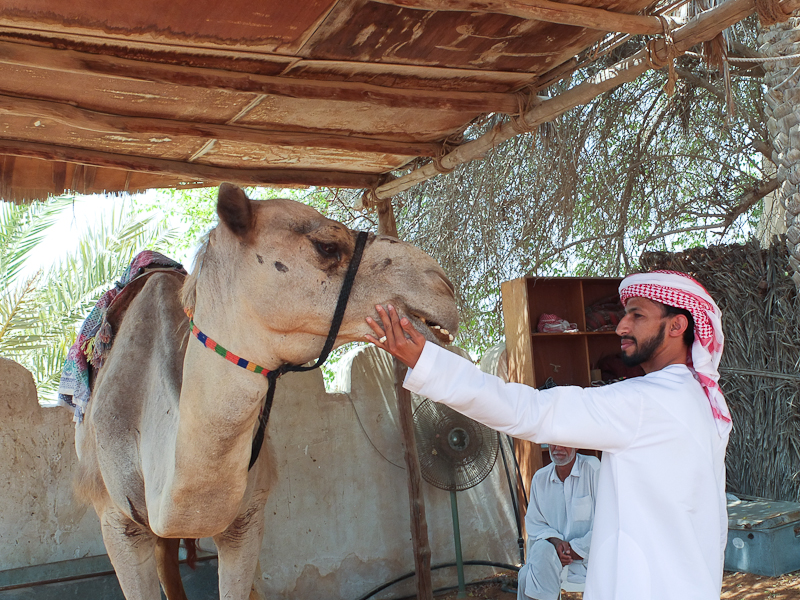 Our next stop after Dubai was Abu Dhabi which is only a 1.5 – 2 hour drive. We were originally going to take the bus which is really inexpensive but since we had so much luggage and it was sooooo hot, we decided to hire a driver. It cost us about $100, but the expense was worth it rather than sitting out in the hot sun waiting for the bus, which really wasn’t appealing.

When I told people how hot it was here most people assumed that it was a dry heat since we were in the middle of a desert. Surprisingly the humidity is really high. One day it was 109 but the dew point was in the 80’s, and according to weather.com it felt like 132. I can’t even begin to describe how unbearable it was to be outside in the heat. It made it extremely difficult to truly explore the area.

When oil was discovered in the region in the late 1950’s the region changed dramatically and growth has taken place at an incredible pace since then. They have gone from living in palm huts with no electricity to a developed country. Growth has been so dramatic that anywhere from 80-90% of people who live in the Emirates are expats who are needed to support the industries in the region. While Abu Dhabi has relied on the oil industry, they realize that their future growth will be dependent on tourism and are following the lead of their neighbor Dubai. We had assumed that Dubai had oil money, but their money has come from developing their tourist industry and becoming the glitzy, glamour spot of the UAE to attract world travelers and spenders. Abu Dhabi is quickly catching up and we saw a lot of construction and development in the city.

Each Emirate has their own culture laws, so while Dubai is probably the most liberal of the Emirates, Abu Dhabi is more conservative. More women were dressed in full muslim dress covering their face, which is called the Niqab. Even in the hotel gym, guests were not given access to water and were not allowed to drink water while working out during Ramadan. In comparison while inside our Dubai hotel we were allowed to eat and drink during Ramadan.

If you find yourself in Abu Dhabi the most important thing to see there is the Sheikh Zayed Mosque. As we drove up to it we were overwhelmed with not only its size but also its incredible beauty.  It can hold up to 40,000 worshipers! It was hard to believe but the interior was even more beautiful. At one time their chandelier was the largest in the world while the carpet is the largest in the world and was woven in Iran.

Several times a day the mosque offers free tours and I would highly recommend timing your visit so that you can take the tour. We had a great tour guide who not only explained about the mosque but also their religion. Muslims pray 5 times a day and the times are dependent on sunrise, sunset and where you are in the world. This prayer clock would flash the the name of each prayer and then the time for that prayer. They also use a lunar calendar which is how they determine when Ramadan will take place, by the sighting of the new moon. Ramadan takes place during the ninth month of the Islamic calendar and the dates change every year because the lunar calendar is different than the solar calendar.

Men and women are separated in the mosque during prayer times. Although visitors aren’t separated, I still had to go in a different entrance and get dressed in the traditional Muslim hijab before meeting up with Brendan again. Muslims ritually wash their feet and the washroom located in the women’s restroom was a beautiful room. 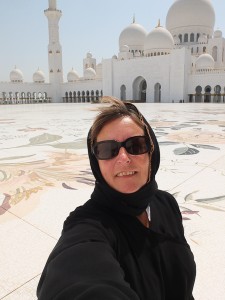 It was so hot, thankfully there was a nice breeze, but still wearing all black was not comfortable.

I really wanted to go on a Red Bus Tour to get an overview of the city. A ticket allows you to hop on and off as much as you want. I would have liked to get off at more of the stops, but the wait for the next bus was an hour at each stop and it was too hot to get off and then have to wait. I decided to get off at the Heritage Village, the Marina Mall to get lunch and go to the top of the Sky Tower and then another stop at the Mosque.

The Heritage Village shows the traditional way of life before the discovery of oil in the region. There are exhibits and crafters and a small museum. It was really interesting but it was so hot, I think I burned the bottom of my feet on the sand when I went to see the camel! By the time the bus came an hour later my pants were literally soaked with sweat. It was quite embarrassing walking around the Marina Mall at the next stop, but thankfully they quickly dried in the air conditioning. The Red Bus ticket includes a free trip up the Sky Tower which is really just a coffee shop at the top, but there were nice views of the city. Thankfully the lower half of the bus was sort of air conditioned but you could still feel the heat blowing in from the top.

On our last day we went over the Emirates Palace Hotel, which has this huge green lawn. There should definitely not be any grass in a desert!  Abu Dhabi uses 250 million gallons of water a day, the highest per capita use of any country in the world and most of it comes from desalination plants.

Everywhere you look you will find images of Abu Dhabi’s leader, from the sides of skyscrapers to billboards and even in the hotel lobby.

Our long trip home was quite interesting especially our flight from Dubai to Amsterdam on KLM. Apparently there was some mix-up with the seat assignments and they gave our seats to someone else. They didn’t even think Brendan had boarded the flight and almost made him leave. It all worked out to our benefit though as we both got bumped up to first class. I have never slept so well on an overnight flight, the lay flat seats were amazing! This is the first time we have taken advantage of showers in the airport and it felt so good, I will definitely be doing that again.We had a great time in both Dubai and Abu Dhabi despite the heat. It is always so interesting to visit and learn about a culture that is so different than ours. I returned to the United States appreciating the rights we have and especially the freedom women have in the United States.