On our last trip to Germany in 2004 we didn’t get to Berlin, so we had been looking forward to going there for a long time. Filled with so much history to explore, our days were filled with walking the city and learning about World War II and the fall of the Berlin Wall ending the Cold War. The Hilton Hotel was in an ideal location so we were able to walk to all the historic sites we wanted to see in Berlin.

After recovering from a long trip starting in Boston and flying through Amsterdam, we spent our first day exploring some sites that we close to the hotel.

Topography of Terror: This is a must see and it’s free. A museum set at the former Gestapo and SS Headquarters, it focuses on the perpetrators of the Holocaust. We did not realize how extensive the museum was and could have spent many more hours here. Go early, before it gets crowded.

Memorial to the Murdered Jews of Europe: This is a haunting site. Wander through the maze of coffin shaped concrete pillars and reflect on this horrific chapter in history.

Brandenburg Gate: This is the last of the 14 Berlin Wall gates still standing. Berlin has a huge park and the gate marks the entrance on the east side.

We had beautiful weather the entire trip, but it definitely was chilly with temperatures in the high 30’s and 40’s. Our second day we wandered over to Museum Island (World Heritage Site).

Berlin Cathedral: This is definitely worth a stop because you can take a long climb up to the dome and get some great views of the city. It was surprisingly not crowded and we had the place pretty much to ourselves.

DDR Museum: The museum focuses on what life was like during the Cold War era. There are lots of hands-on displays and fun exhibits, but definitely be prepared for lots of people and school groups.

Berlin Wall Memorial: This is a must see. Completely free, there are 2 museums along the mile memorial that includes a stretch of the longest surviving stretch of the Berlin Wall. While there make sure to stop in the Nordbahnhof “Ghost” Station, which is right by the Visitor Center. When the wall went up, East Berlin boarded up the station, but they still allowed the West Berlin trains to run through the station although they were not allowed to stop.

Fun Fact: Keep an eye out for the Ampelmännchen or “Little Traffic Light Man” from the East Berlin Days. At the crosswalks in East Berlin. The popular figure was almost eliminated after the fall of the Berlin Wall, but a 10 year legal battle saved it and now they are starting to show up on the former West Berlin side. Make sure to stop at an Ampelmann Store to pick up a souvenir. 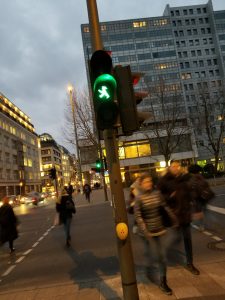 On Wednesday we took a train to the town of Oranienburg to visit the Sachsenhausen Memorial and Museum. This was the site of one of the Nazi’s most notorious concentration camps. The trains are really easy to navigate, tickets can be bought at automated kiosks, but Brendan never has much luck with technology, so we decided to find a ticket counter and she was extremely helpful and explained what we needed to do, most importantly validate the ticket at an automated machine before boarding the train! We also had to change trains and had a tight 5 minute connection, but we made it! Sachsenhausen was the first concentration camp and was also the command center for the all the concentration camps. This is a somber and difficult memorial to visit, but well worth the trip.

On Thursday Brendan went to the German History Museum, while I spent the morning at the National Art Gallery, which was amazing! And on our final day we visited the East Side Gallery, a mile long stretch of the Berlin Wall that has been turned into a giant art gallery with murals painted by artists from all over the world. Unfortunately many of the murals had been defaced by graffiti, but it is still worth a visit. Friday was the coldest day by far, and because the gallery was fairly far from the hotel, we decided to take a taxi there and then walk back. At one point we stopped in a train station to warm up with some hot chocolate.

It was up bright an early, 3:15 a.m. eeek! to catch our flight to Amsterdam and then back to Boston. We are so glad we finally got to explore this amazing city!