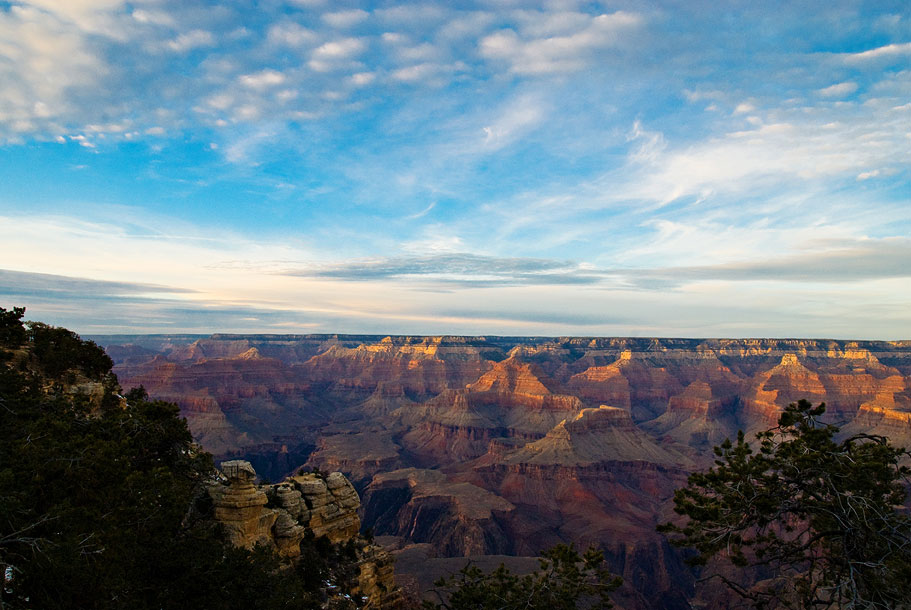 Words just cannot describe how beautiful, jaw dropping, amazing the Grand Canyon (World Heritage Site) is. The canyon colors change with the shifting light, so you could go to the same view point at different times and days and it will look completely different. Most of the time photographers are looking for soft, overcast light, but at the Grand Canyon the colors are much more spectacular with the sun during the early morning and late afternoon. 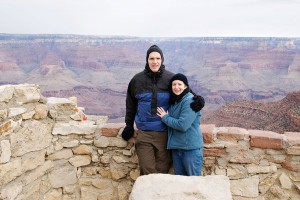 We flew into Phoenix and then drove to our hotel right outside the park, which took about 4-5 hours. On the drive up we got off the main highway and drove through Sedona and Oak Creek Canyon which is at 7,000′ elevation and there was snow on the ground.

The sun rises late here this time of year and we arrived at Mather Point around 8:15 to gorgeous views and crowds. We didn’t think it would be too crowded this time of year, but it turns out we were wrong, although I’m sure that the crowds during the summer are unimaginable. We stopped at the visitor’s center to find out the trail conditions and it looks like we won’t be doing any hiking down into the canyon, most of the trails are ice covered right now and you need crampons to hike down into the canyon. There’s plenty of hiking along the rim though!

Brendan and I decided to venture beyond the Grand Canyon and take a short drive down historic Route 66. Arizona still retains a large portion of the original Route 66 and we got off I-40 and drove down Route 66 to Seligman. There werr tons of Route 66 memorabilia and historic sites in this small town. We also stopped in historic Williams, which is also along Route 66. You can take a train from Williams right to the Grand Canyon village, which I think would be kind of cool! It’s really easy to get around the South Rim of the Grand Canyon once you get there because they have an amazing shuttle system, so you don’t even need your car. 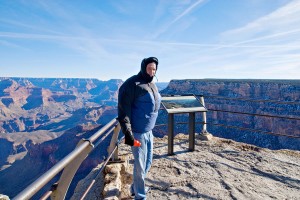 The wind was really strong one day and it felt like hurricane force winds on the rim, so the wind chill was very cold.  We still managed to hike about 4 miles from Bright Angel Lodge to Powell Point.

On our last day at the Grand Canyon we drove out to Desert View which is in the eastern section of the park. This section of the park gets a lot less visitors, but there are some great views of the Colorado River from here. We walked out to Yaki Point which is only accessible by shuttle bus and is the starting point for the Kaibab Trail which is one of the trails down into the canyon. We were so bummed that we couldn’t hike down into the canyon because of the conditions that Brendan made us walk down to the first switchback just so we could say we hiked down:) Just as we were leaving the Grandview Point Brendan spotted a coyote on the edge of the road.

Our drive back to Phoenix we stopped in Flagstaff where we did a little shopping. In Phoenix we had dinner in a really cool section on Mill Street.  If you’re ever in Phoenix this seems like a really great part of town, lots of shops and restaurants.  I just can’t ever imagine living here, our waitress told us it can get up to 120 degrees in the summer!