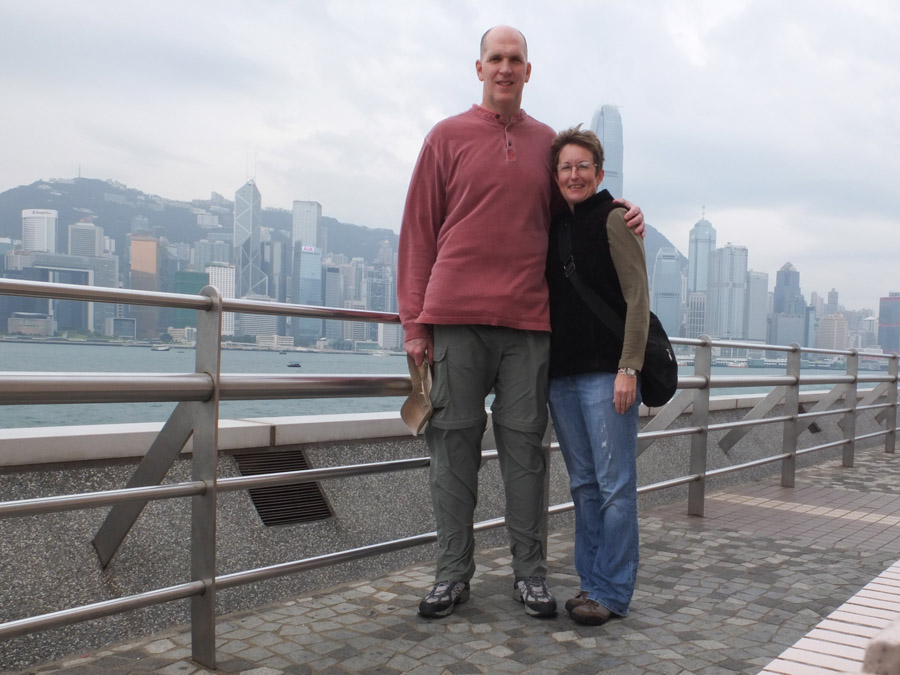 It’s a long way to Hong Kong from Maine but we finally made it. We had originally booked a direct flight from Detroit to Hong Kong, but Delta eliminated that route so they rebooked us through Tokyo. After a 13 hour flight to Tokyo and then a 4.5 hour flight to Hong Kong, as well as crossing the International Dateline and losing a day, we were definitely exhausted! Neither of us suffered from jet lag on this trip and I attribute this to the fact that we arrived late in the evening so we both went right to sleep and were able to quickly adjust to the local time.

Since we arrived so late we decided to stay at the Marriott SkyCity by the airport for the first night.  The next morning we woke up had a nice relaxing breakfast and then took a taxi into the city, which is about 30 minutes away. The red taxis are the only ones allowed into Hong Kong, so make sure to take the right color taxi. After checking in to the Courtyard Marriott we decided to walk around and get a feel for the city. We were overwhelmed with 1. the number of people and 2. the intensity of the smells, just like when we were in India. As we walked down the street it was funny to watch the looks Brendan was getting. His 6’6″ stature really stood out and as we passed one gentleman he stopped in his tracks and watched us walk down the block. He was still staring when I glanced back halfway down the block.

As we were walking around we ran into the Man Ho Temple which is really cool. There were giant incense coils hanging from the ceiling and people were making offerings to the Gods. After wandering around the city for a little we decided to head to Times Square for dinner. This ended up being a huge mistake. Times Square was on the other side of the city from our hotel and traffic was unbelievable. When we finally arrived the crowds were huge. I’m not sure if it is always this way or if it was because it was Christmas Eve, but it felt like a big celebration. The Frommer’s guidebook mentioned there was a California Pizza Kitchen there, which we discovered had closed down. Although we love to travel we are very careful about what we eat and drink, especially when we are in places that are so different from the U.S. There is nothing worse than getting sick when you are traveling, plus I think we both have fairly sensitive tastes. It’s even harder when you can’t understand the menu! Because it was Christmas Eve a lot of the restaurants were either booked or had a special menu but we finally found a place that had something familiar, spaghetti.

While the weather is much warmer than winter in Maine, mid 60’s, the forecast was for cloudy days, but at least it wouldn’t be raining. The funny thing we noticed was that most people were walking around in heavy winter coats. It was Christmas day and there were decorations everywhere, which we were not expecting. While it is not a religious holiday for them apparently it is still a holiday that they celebrate.

Our first stop was to go back to the Man Ho Temple, I wanted to get some more pictures and then we wanted to see the largest people mover in the world, the Mid-Levels Escalator. Since the city is built next to mountains, the streets are quite steep, so they built a huge escalator system for people to get up and down. In the morning the escalator goes down into the city for the commuters and the rest of the day it goes up. It is completely free and you can get on and off easily.

After riding the escalator we walked to Hong Kong Park and ran into the tram ride up the mountain to The Peak. We had read that it can get really crowded and it didn’t seem too bad right then so we decided to go up. The tram ride was great but a little scary when it stops on the steep incline; I kept imagining the cable breaking and the tram plummeting down the mountainside! There is a big mall at the top with lots of restaurants and shops. With beautiful views of the city this is a must see if you go to Hong Kong. Definitely walk along Lugard Road while you are up there to escape the crowds. 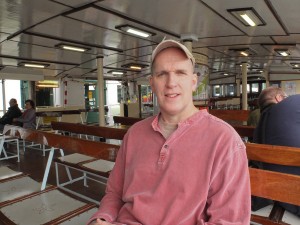 Arriving on Kowloon we walked along the harbour for fantastic views of Hong Kong and checked out their Walk of Fame. Of course the only famous actor we knew of was Bruce Lee. Then we went to the Hong Kong Museum of History which was really interesting, I learned a lot and it is well worth a visit to understand the history and culture of Hong Kong. After walking through Kowloon Park we headed back to the docks and as we were going through the shopping district, tailors kept asking Brendan if he wanted to buy new clothes. This is a big industry here, but we weren’t expecting them to be that aggressive.We only had two full days in Hong Kong so on our last day we decided to go to Kowloon which is across the harbour. We discovered that the hotel provides a shuttle to the IFC Mall, which is right next to the docks.  We walked through the mall and there were hundreds of people waiting in line to get into the Apple Store! Approximately every 10 minutes there is a ferry across the harbor and the ride only takes about 5 minutes. It is really inexpensive and easy to take, just purchase a token at one of the vending machines, go through the turnstiles and wait for the ferry.

Next stop Taipei! We ended up going back to Kowloon that evening to see the city lights. We were trying to decide between going up to The Peak or Kowloon and decided on Kowloon because it is so easy to get there. While it was crowded the ferry was just so much faster and can hold a lot more people than the tram. Because it was Christmas a lot of the buildings had Christmas and holiday lights.