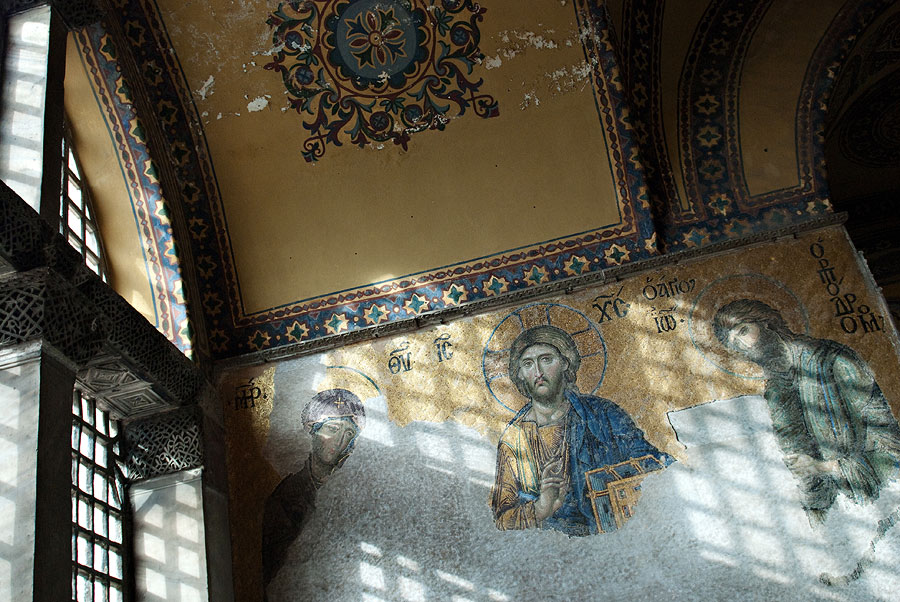 Istanbul (World Heritage Site) is truly a magical place, in fact at the market someone tried to sell us a magic carpet:)  Walking the streets of Istanbul and hearing all throughout the city the hauntingly and beautiful Muslim call to prayer five times a day was surreal.

We arrived in Istanbul on Christmas day taking a one hour flight from Athens on Turkish Airlines; we were even served a meal on the flight, and this was a big plane!  In the states we can’t even get drink service on the 45 minute flight from New York City to Bangor with only 40 people on the flight, the flight attendants always say there isn’t enough time.  After a long taxi (not cabs, they don’t know that word) ride into the city and going through security at the hotel…our taxi was searched on arrival and we had to go through a metal detector as well as our bags getting screened, we checked in and went out for a walk.  Turkey is 98% Muslim which does not celebrate Christmas so the city was quite busy and everything was open.  We discovered some back streets where backgammon is a very popular game played in the street cafes.

We knew we needed to be on guard for scammers but we completely fell for one our first day.  As we were walking down the street a shoe shiner passed us and dropped his brush, so Brendan was kind enough to yell out to him to let him know.  As we walked away he called to us and wanted to shine my shoes, of course I thought he wanted to do it to thank us, but after he started he wanted money.  I was planning on giving him some money anyway but he wanted way too much.  We argued and then walked away, I think because Brendan is so tall he didn’t come after us.  I began to think the whole thing was a set-up which was confirmed a few days later when the same thing happened to us, except we ignored the brush when it dropped to the sidewalk and walked the other way.

Istanbul is actually on two different continents, Europe and Asia, separated by the Bosphorus Strait.  Brendan had really hoped to walk from one continent to another, unfortunately they no longer allow you to walk across the Bosphorus Bridge and we never got a chance to take the ferry over to the Asian side.

Our hotel was located in the newer part of Istanbul so every day we would walk down (of course on our return we have to walk up a very steep hill) to the Golden Horn (an historic inlet of the Bosphorus) which separates newer Istanbul from old and we walk across the Galata Bridge which is jam packed with fishermen.  The Golden Horn is filled with ferries taking commuters from one side to the other.  Our first day was busy visiting the Hagia Sophia, a former mosque turned into a museum; the Blue Mosque, and the Topkapi Palace, former home to the Ottoman Sultans.  The Blue Mosque was Brendan’s first time inside a mosque (I had visited one in India).  No visitors are allowed during prayer time and when you enter you most remove your shoes, women must cover their heads and there is no talking allowed.  The Topkapi Palace was filled with beautiful jewels, one of which was the 86 carat Spoonmaker’s Diamond.  By that time I was so exhausted I don’t think I truly appreciated the palace because I knew we had a long uphill walk back to the hotel…of course we took the longest route back!

On our second day we finally discovered a much faster way down to old Istanbul which made the walk much more enjoyable.  Our first stop was the Spice Market, the colors of the spices are amazing and the vendors were funny trying to attract our attention.  Some of my favorite quotes,

We then went to the Mosque of Suleyman the Magnificent, which was by far the most beautiful of all of them.  It wasn’t nearly as crowded as The Blue Mosque but I was appalled by the lack of respect of some of the tourists.  Although everyone removed their shoes, some women did not cover their heads and one photographer crossed the barrier set-up for visitors between the payer area.  Outside all the mosques are areas with faucets for Muslims to cleanse themselves before prayer.  It was at this mosque that I got to experience the non-modern WC (restroom) which was basically just a hole in the ground.  We discovered there are two signs, one with just WC and a Modern WC, which means there is actually a toilet.

Our last day was spent at the Grand Bazaar which was ok, not nearly as good as the Spice Market and we upset one vendor when we tried to bargain with him, he actually told us to never come back.  It wasn’t like he was selling something we couldn’t find at a thousand other stalls.  We wandered around for awhile and the place is huge; it wasn’t nearly as crowded as we expected which is probably why it wasn’t as fun.

Before we catch our flight the next day we decided to walk around the narrow and winding streets off of Istiklal Caddesi (which is a pedestrian only street) and we found the coolest area with lots of little antique stores, a great way to end the trip.

Our flight home was uneventful, thankfully we missed the weather chaos at Heathrow and in the states, our timing was perfect for once!